‘A world-class place to live and work.’ That is how President Juncker described Europe at the summit to formally proclaim the EU Pillar of Social Rights in Gothenburg last month.

And he added: ‘Europe is more than just a single market, more than money … It is about our values and the way we want to live’.

So how do we live? Do the 510 million Europeans across the current 28 Member States really feel that their living conditions are ‘world-class’?

Certainly, many do. But many others still face inequalities and feel excluded or insecure, worry about access to decent housing and jobs and wonder about the future for themselves and their children. This is reflected in growing populist sentiment that seems to reject the Establishment, making the general narrative on Europe appear largely negative.

But, as always, the reality is significantly more complex.

In fact, the last few years have been generally good and the ‘wind is (indeed) back in Europe's sails’. The results from the most recent European Quality of Life Survey show overall progress in the areas of quality of life, quality of society and quality of public services. We have seen improvements for many, although from low points following the economic crisis. Indeed, in some cases, the indicators finally display a return to pre-crisis levels – reflecting, in part, the general economic upturn and return to growth across the Member States.

Levels of optimism have risen, and life satisfaction and happiness ratings have remained generally high in most EU countries. Satisfaction with living standards has increased in a majority of Member States and more people can now make ends meet than was the case in 2011.

Trust in national institutions has actually increased across the board and young people in particular show greater trust in other people. The welcome growth in engagement and participation in social and community organisations across Member States and the decline in feelings of social exclusion, which were more prevalent in the downturn, are also signs of a more positive post-crisis environment. Indeed, perceived tensions in society between poor and rich people, management and workers, old and young persons and men and women, have all declined during the last five years. 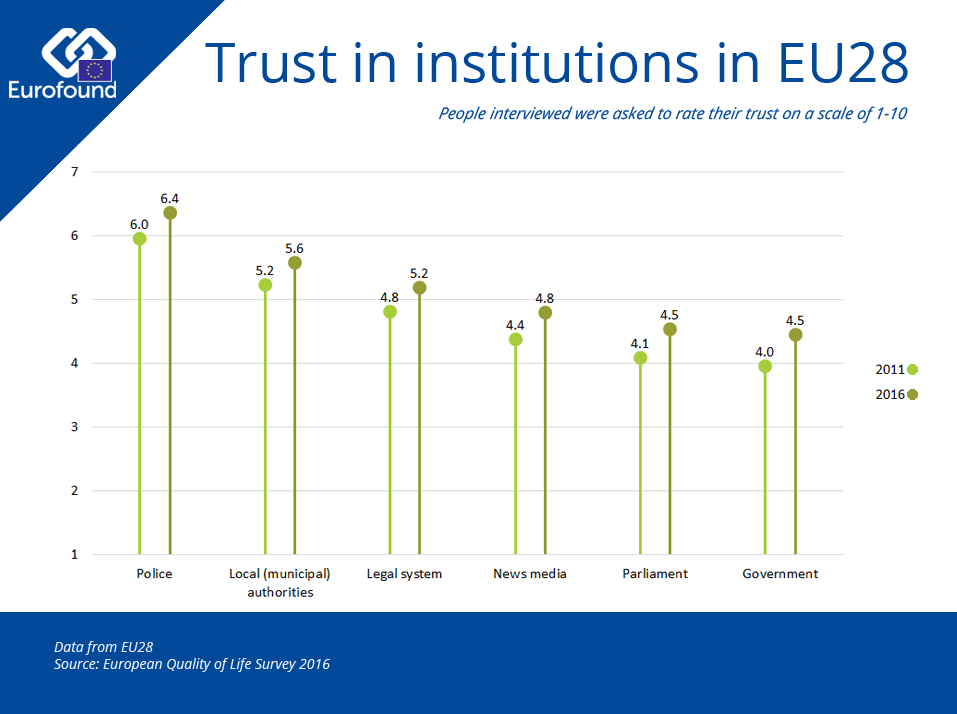 Moreover, contrary to popular belief, people are actually more satisfied today overall with critical public services such as healthcare and transport – and even with childcare services in some countries.

So far, so good, it would seem.

But, at the same time, we clearly have some way to go.

While a number of countries, mostly in central and eastern Europe, continue to catch up, others have stalled in the process of upward convergence and the gap has even widened in some areas. Satisfaction with living standards, for example, increased particularly in Bulgaria, Estonia, Hungary, Ireland and Poland, while life satisfaction declined in Croatia, Cyprus, Greece, Italy and Spain. This can partly be attributed to the economic situation of the country concerned. Great differences remain between Member States in terms of both access to, and quality of, health and care services.

There are also still profound inequalities across different gender, age and income groups.

Women, for example, report slightly higher levels of life satisfaction than men, but continue to manage more unpaid household and care work. Further compounding the gender divide, the growing need for long-term care of older people – where women continue to contribute more – is one of the main reasons behind difficulties with work-life balance.

Older people indeed fare less well than their younger counterparts, particularly in some central and eastern European countries, and age clearly contributes to decreasing life satisfaction in Bulgaria, Croatia, Malta, Poland, Portugal, Romania and Slovenia. In two-thirds of the EU Member States, more than half of respondents also have concerns about their levels of income in old age.

In fact, despite growth that has seen fewer people reporting material hardship compared to five years ago, over half of the population in 11 Member States still say they have difficulties making ends meet. This is marginally down on the 13 Member States where the majority of people expressed difficulties making ends meet in 2011 , but still more than 2007 levels. As always, the poor suffer most, and the results show that quality of life has improved less for those in lower income groups.

Indeed many Europeans have less optimism about the future for their children than for themselves. But here, again, divides are obvious, with less optimism about future generations in Austria, Belgium, Czech Republic, France, Germany, Greece, Italy, Luxembourg, the Netherlands, Slovenia, Spain, and the UK; while in Bulgaria, Finland, Latvia, Lithuania and Poland people believe their children’s prospects are better than their own.

And, in the context of the wider high-stakes debate on migration and mobility across the EU, it is worth noting that perceived tensions between different religious and ethnic groups have markedly increased in certain countries, notably Bulgaria, Estonia, Denmark, Germany, Malta, Austria, France, Belgium and Italy. This runs counter to the general decrease in perceived tensions between different groups in society.

Such is the nuanced picture of life for the EU citizen as governments, local and regional authorities, social partners and civil society set about implementing the Pillar of Social Rights. These results from the European Quality of Life Survey highlight the need for policy-makers to focus on groups that are most in need: the long-term unemployed – who suffer a higher risk of poverty, social exclusion and mental health issues – in the context of active support for employment; women – who continue to shoulder the largest share of household and care work – in the context of gender equality and childcare principles; care support and services to embed the right to better work-life balance across the whole of working life; poorer older citizens – in the context of the right to adequate old-age income and pensions; as well as on divergence disparities in the availability of quality services – in the context of the right to timely access to affordable health- and social care.

But these are just some of the critical initiatives required to match the daily reality of Europe’s citizens with the ambitious aspirations of the Pillar. If this is truly to be a landmark moment for Europe, we need to translate this kind of evidence into implementation and these data into delivery, to indeed uphold ‘our values and the way we want to live.’ 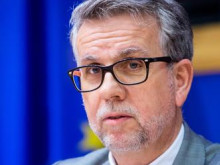 Juan Menéndez-Valdés was appointed Director of Eurofound in December 2010 and is currently serving his second mandate. He is responsible for the... Show more

Tune in at 09:30 CET on 8 March and watch: Access to and quality of public services in the EU - a debate on improving quality of life

Eurofound and the European Economic and Social Committee, under the banner of the Bulgarian Presidency of the EU, bring together representatives of the social partners, EU institutions, national and regional representatives, practitioners, civil society and academics to debate on access and quality of public services in EU28, as highlighted in Eurofound’s European Quality of Life Survey.

The Heads of the EU Agencies have pledged to communicate to their staff that harassment in the workplace is not acceptable, to ensure respect for existing laws and the staff regulation, to promote diversity at work, and to provide a trusted environment in the workplace. 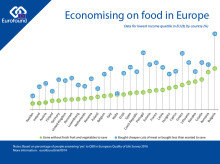 People in the lowest income quartile in the EU are going without fresh fruit and vegetables to save, and a higher proportion are buying cheaper cuts of meat or buying less meat because of money concerns. This practice is occurring throughout Europe, but there are vast differences between Member States. 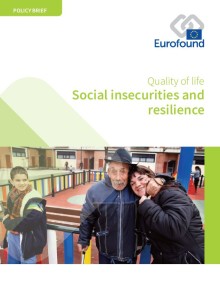 Feelings of insecurity widespread in Europe

Feelings of insecurity in several dimensions of life are widespread in the EU, even among those who are materially well-off. Only 1% of the EU population enjoys the highest level of security in the combined areas of personal security and security in housing, healthcare, employment and old-age income.

Quality of life improving in Ireland but challenges remain

Quality of life is improving in Ireland, particularly in relation to social cohesion, with the country recording some of the highest levels optimism in the EU and lowest reported levels of tension between racial and ethnic groups. However, a number of challenges remain, notably in public transport, childcare services, and social housing – all of which are rated below EU averages. 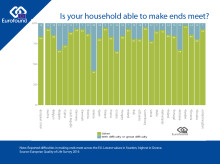 Eurofound’s European Quality of Life Survey (EQLS) 2016 shows that there are vast differences in reported abilities to make ends meet at household level in Europe. 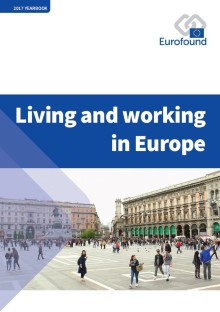 Europe’s recovery means a better life for many, but not all

​The number of people active in the labour market is at an all-time high, ratings for key public services are increasing and there is a marked recovery in trust in national institutions in many Member States, these developments are detailed in Eurofound’s latest Living and working in Europe yearbook for 2017. 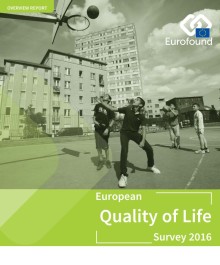