Czechia records the lowest rates of those at risk of poverty and social exclusion across the EU at just 12.2% – considerably below the EU average of 21.7%. The number of people reporting difficulties in making ends meet has also decreased from 52% in 2011 to 40% in 2016 and perceived quality of public services has improved to be in line with EU averages. These positive developments go hand in hand with the strong performance of the labour market, which has risen to nearly 80% employment over the past seven years.

Although the current economic situation is generally very positive, the Czech economy has a heavy reliance on low wage employment. Czechia has the fifth lowest number of 30-34 years olds who have completed tertiary education at 33.7%, which is below the EU average of 40%. As automation and digitalisation become more prevalent, challenges may present in terms of upskilling the workforce to adapt to more highly skilled work often associated with an expanding services sector.

The overall picture of relatively low inequality and the continued rise in living standards does however mask some increasing regional disparities. Eurofound’s recent report Shifts in the employment structure at regional level identifies that largely urban regions in Czechia have benefited from economic growth, while areas with lower productivity generally suffer from greater social and economic inequality.

In general, Czechia has seen very strong economic growth and positive improvements to quality of life, with unemployment hitting a record low this year and the lowest number of people at risk of poverty recorded across the EU. There is however a large proportion of the labour force working in low skilled employment who may be required to upskill as the country embraces automation and digitalisation.

Eurofound has been monitoring and reporting on living and working conditions in Czechia, in comparison to other EU Member States, since before accession to the EU in 2004.

​Contrary to a generalised concern about a ‘crisis of trust’ in the aftermath of the financial crisis, trust in national and EU institutions has bounced back to pre-crisis levels, while civic engagement has increased, and perceived social exclusion has decreased. 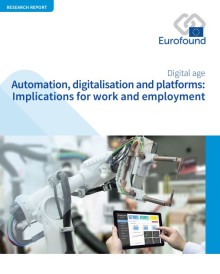