People in Europe’s capitals more satisfied with their lives

People living in the capital cities in Europe generally have a better quality of life and report higher life satisfaction than those living in other parts of the country. Capital cities also have a larger proportion of people who report feeling being able to cope during times of hardship than other urban centres and rural regions.

Eurofound’s new analysis of the latest European Quality of Life Survey (EQLS) compares quality of life and well-being, quality of society, and quality of public services in Europe’s capitals and major cities with respective national averages. The study not only gives an indication of what perceptions of quality of life is like for the 48 million people that live in capital cities in the EU, but also other major European cities such as Istanbul and Belgrade.

In addition to a generally higher life satisfaction, capital city residents tend to be more satisfied with how democracy works in their country compared to the population outside the capital. This difference is largely associated with socioeconomic background, which on average is more advantageous in capital cities. Capital city residents also tend to have greater trust in national institutions and be more critical of local or municipal authorities than people in the rest of the country. 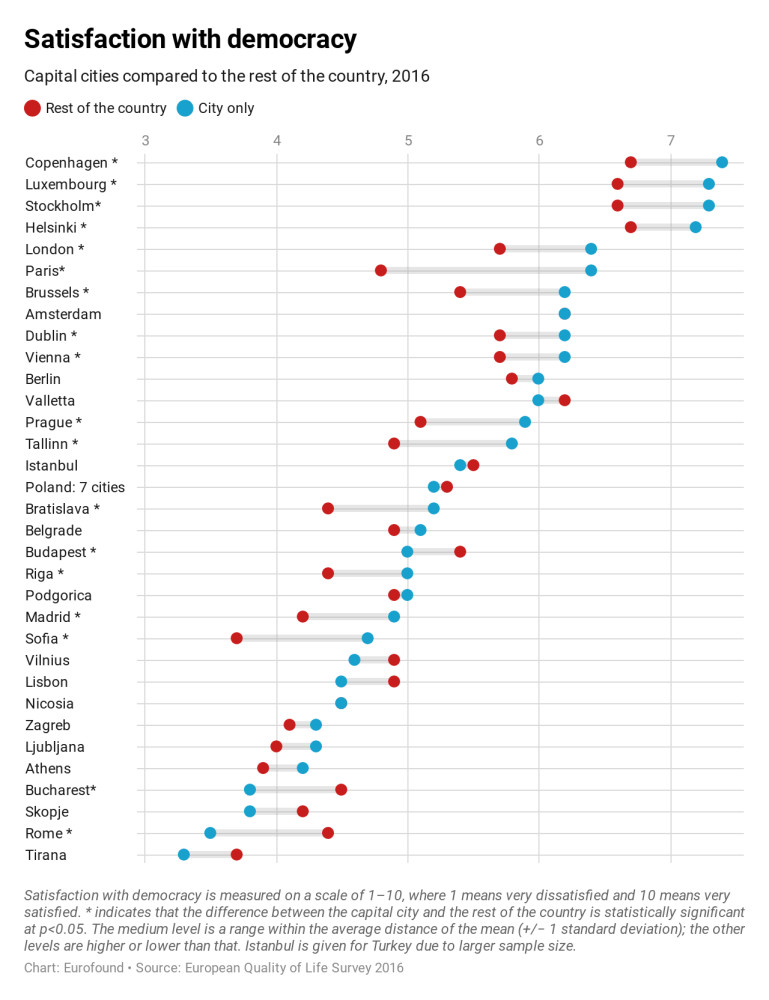 Capital city residents tend to be more satisfied with how democracy works in their country. Get the data here.

Despite the greater availability of public services in capital cities, residents do not always rate the quality of these services higher than people outside the capital. For instance, they give lower ratings for the education system. Quality of public transport, on the other hand, is rated higher by people in capital cities, even though they commute for longer than people in other parts of their country.

Housing insecurity is a notable problem in many capital cities – of all the indicators examined, more capital cities fall behind the rest of the country on this indicator by a significantly larger gap. 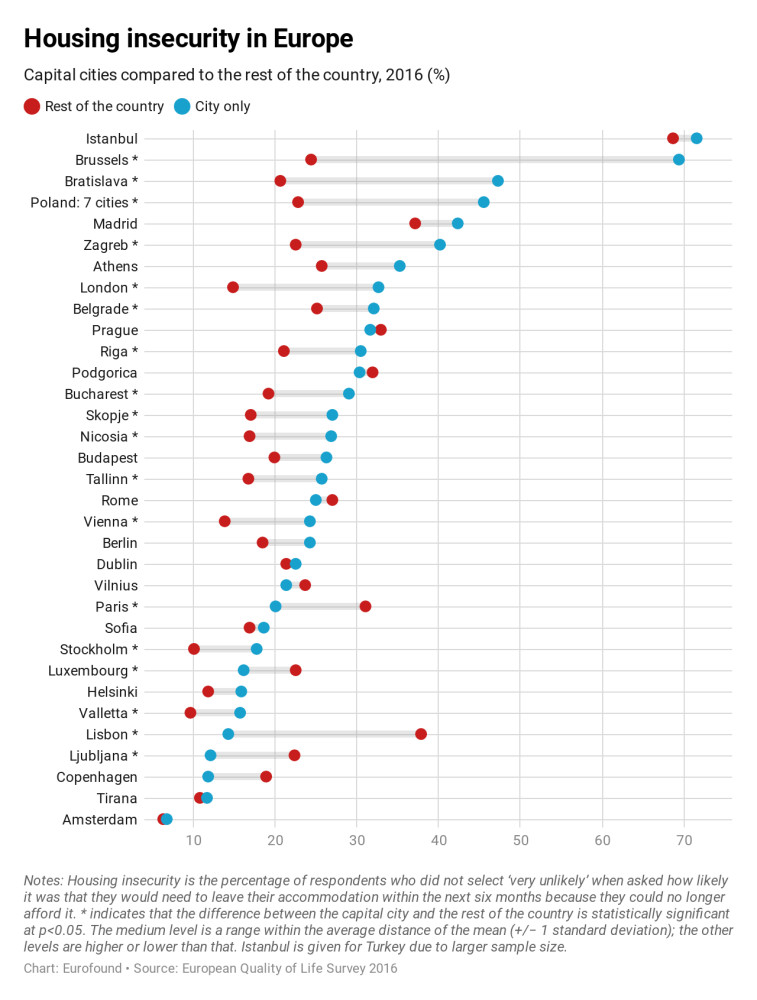 Despite concerns of a growing pan-European disconnect between rural and urban life, the differences between the north, south, east and west of Europe are as apparent in the case of capital cities as they are for countries in general. This shows that national-level factors and policies are still a primary determinant of well-being outcomes of cities in different countries.

This research from Eurofound is the latest to contrast life for those inside and outside urban centres, and complements both the 2019 European Jobs Monitor report, which showed that metropolitan regions had the fastest employment growth over the last decade, and the 2019 analysis of EQLS data on rural Europe, which showed that people in rural Europe were more likely to report difficulty in making ends meet.

Quality of life improving in Lithuania although signs of inequality remain, particularly for older people, women

Lithuania has experienced significant improvements to the perceived quality of public services and overall living standards in recent years. However, despite overall increases to quality of living standards, income inequality has been increasing since the financial crisis, making Lithuania’s income distribution the second most unequal in the EU.

People living in Budapest, Paris and Amsterdam report among the longest commuting times in the EU, according to Eurofound's new analysis of the 2016 European Quality of Life Survey.

Dublin and London have higher proportion of people struggling to cope

Dublin and London have a higher proportion of people that report low resilience, which is an expressed difficulty to cope with important life problems, than both the national averages and the EU average. This goes against the general trend that people living in capital cities have a higher level of resilience than other urban or rural areas.

Estonia reports substantial increases to life satisfaction and happiness levels over the last fifteen years and optimism for the future is high with 69% feeling optimistic for their children’s or grandchildren’s future - above the EU average of 57%. Coupled with this, the perceived quality of public services has improved with childcare and public transport seeing the greatest increases.

Where are all the good jobs?

Economic disparities have been decreasing between EU member states over the past decade, but at the same time inequality has been growing within member states. Despite national level convergence, the gap in wealth and income between the rich and the poor is growing in most of Europe.

Europe’s economy, and particularly the economy of rural Europe, may have it all to gain from a low-carbon transition, but getting everyone on board could turn out to be the greatest challenge.