This graph shows the projected impact of fully implementing the Paris Climate Agreement on the GDP of different countries in the EU by 2030, compared to a ‘business as usual’ baseline forecast.

Latvia, Malta and Belgium will experience the largest boost to their GDP. At close to 6%, the projected growth in Latvia’s GDP is by far the most significant – this is largely due to the energy efficiency investment required, and the reduction in fossil fuel imports relative to GDP.

The successful transition towards a low-carbon economy, as defined by the Paris Climate Agreement, is projected to result in a 1.1% growth in GDP, and a 0.5% growth in employment, in the EU as a whole. Globally, China is also projected to benefit from a low-carbon transition, but the United States would experience a 3.4% drop in GDP, and a 1.6% decline in employment.

This analysis is based on a global macro-economic model run by Cambridge Econometrics, and Eurofound’s European Jobs Monitor. It is  is detailed in the new Energy scenario: Employment implications of the Paris Climate Agreement report from the Future of Manufacturing in Europe (FOME) project.

Event: Future of Manufacturing in Europe

Harnessing the future potential of manufacturing in Europe

Manufacturing is set to be core to Europe’s future. More jobs will be created and growth will increase if certain economic and industrial changes are well managed over the coming years, according to new research from Eurofound.

EU, China, US will suffer economically from the re-emergence of protectionism

The EU, China, the US, Mexico and Canada, are projected to suffer economically from the re-emergence of economic protectionism, and a significant increase in trade tariffs. In the case of the EU, the bloc would experience a 1% contraction in GDP, a 0.3% lower rate of employment, and a 1.1% decrease in imports by 2030, compared to a ‘no new tariffs’ baseline scenario.

Implementation of Paris Climate Agreement could boost EU GDP by 1.1%

The successful transition towards a low-carbon economy, as defined by the Paris Climate Agreement, is projected to result in a 1.1% growth in GDP, and a 0.5% growth in employment, in the EU between now and 2030. This is compared to a ‘business as usual’ baseline forecast.

Netherlands, Hungary, Germany stand to lose out most in Europe from global economic protectionism

This graph shows the projected impact of an immediate and significant increase in global trade tariffs on the GDP of each Member State in 2030, compared to a ‘no new tariffs’ baseline forecast. 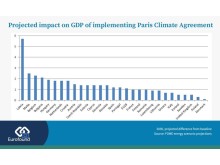