The growth in average (nominal) pay of employees has accelerated in recent years in EU countries after a slump following the economic crisis (AMECO data). Similar developments show up in data on collectively agreed wages. However, higher wage growth figures do not automatically mean that all employees benefit equally. On 14 February 2017, the European Trade Union Confederation (ETUC) launched a campaign Europe needs a pay rise. It says workers’ wages have not kept pace with productivity for decades and have been falling compared to profit, shares and capital income. One way to counter wage inequalities in the labour market is to set a statutory minimum wage level.

According to EurWORK’s article on Statutory Minimum Wages in 2017, growth in minimum wages in the EU has accelerated this year compared to the previous year. This development is consistent with recent progressive developments in average nominal compensation per employee and in collectively agreed wages. Fifteen out of 22 EU countries with general statutory minimum wages implemented greater increases during 2016–2017 than 2015–2016. Newer member states generally experienced a more pronounced growth than the majority of other EU countries, with Romania, Hungary and the Czech Republic leading the charge and with increases reaching up to 38% in Romania. Within the EU-15 minimum wages grew most in Spain (up 8%).

Since 2010, we have, nevertheless, observed a convergence in nominal statutory minimum wages across EU countries. These have generally risen most strongly in the new Member States (led by Romania with 142%). In comparison, within the EU-15, the biggest growth took place in the UK (26%). This pattern of convergence remains even after recalculating the changes in minimum wage in real terms. But it is still far from complete. Indeed, following the provisions of the Fiscal Adjustment Programme, Greece is the only Member State in which the minimum wage now is lower than it was in 2010 (by about 20%). 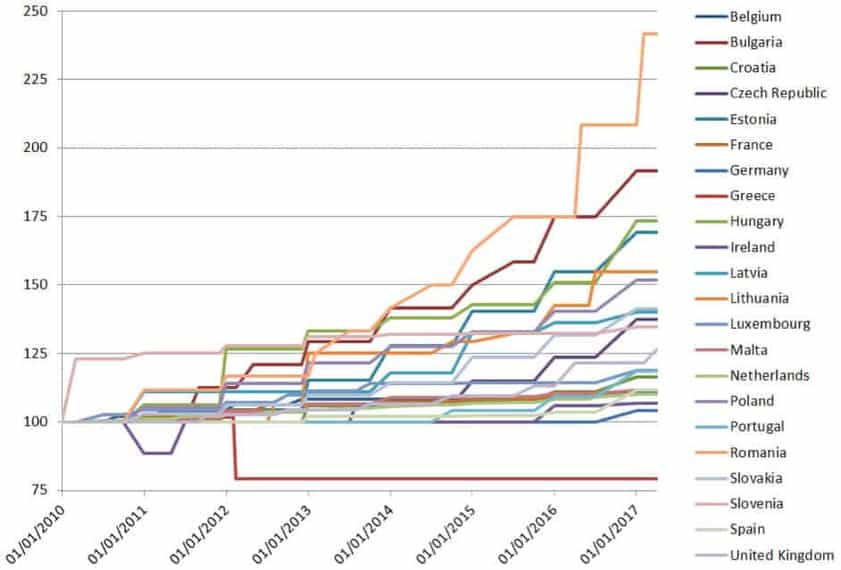 Wage inequalities have been growing in the developed economies over the past three decades. Eurofound’s report from 2015 shows that since the onset of crisis the wage inequality has gone down in EU countries. One strong reason for this is that some relatively low-paid segments of employment were simply eliminated. Another factor may be minimum wages because they seem to have a compressing effect on wage inequality. At the same time, the proportion of minimum wage earners increases when minimum wages grow rapidly or when their level is relatively high compared with the average wage. After comparing fragmented data on the coverage of the minimum wage across EU countries, our report found that three of the four countries that have experienced the highest growth in the minimum wage since 2010 (Romania, Hungary and Estonia) report having a considerable number of employees receiving the minimum wage (for the fourth ­– Bulgaria – no data are available). Relatively high minimum wages are also indicated to have a negative impact on employment among low earners.

Minimum wages are high on the political agenda in the EU

Last year, MEPs first floated the idea of a minimum wage pegged at 60% of the median income in a resolution on social dumping. (See Eurofound’s 2013 report which examines hypothetical effects of such provision.) However, such proposals are controversial among businesses, politicians and even some trade unions.

EU Social Affairs Commissioner Marianne Thyssen has insisted over recent years that she wouldn’t propose an EU-wide minimum wage. However, Commissioner Thyssen has encouraged individual countries to introduce one. At the end of January, Jean-Claude Juncker, President of the European Commission, called for a minimum salary in each EU country.

While minimum wages protect employees from receiving extremely low wages, their ‘side effects’ are often disputed. Especially with regards to unemployment, many claim that setting minimum wages too high can lead to rises in unemployment. To avoid this, minimum wage growth needs to be accompanied by sufficient growth in labour productivity. As such minimum wages need to be used in a virtuous circle with pro-active fiscal policies and incentives to, for example, increase educational attainment levels and develop high added-value economical activities.

Life beyond the minimum: Living wage could help combat in-work poverty across the EU

Implementing a living wage could play a significant role in offsetting the rise of in-work poverty across the European Union, according to a new report from Eurofound on the Concept and practice of a living wage in the EU.