The dilemmas for decision-makers setting the 2021 minimum wage rates were aggravated by the COVID-19 pandemic. Their usual concern to strike a balance between adequate wages for the lowest-paid employees and safeguarding jobs and businesses was amplified by the challenging economic outlook: growing unemployment, a downward pressure on wages and huge uncertainty about the future. The disruption to the normal negotiation and consultation processes, caused by the virus-containment measures, added to challenges.

Were statutory minimum wage adjustments affected by the troubled economic situation? To some extent, yes: while rates rose in 2021 across most countries, the magnitude of the rises were lower than a year ago. 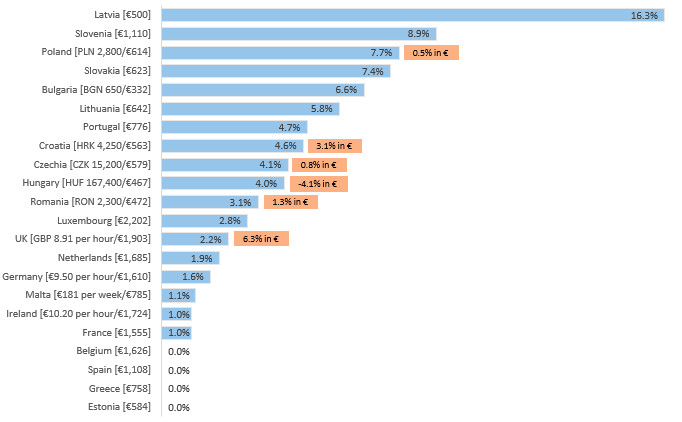 Notes: The percentages in the blue bars refer to the increases in gross statutory minimum wages in national currencies between 2020 and 2021. The percentages in the orange labels show the growth rates in euro for non-euro-zone countries. The minimum wage levels in 2021 are reported beside the country labels (monthly rates, if not otherwise indicated, and converted to reflect 12 payments in Greece, Portugal, Slovenia and Spain). Austria, Cyprus, Denmark, Finland, Italy and Sweden are not included as they do not have a statutory minimum wage.

Strong minimum wage growth over the last decade in most countries 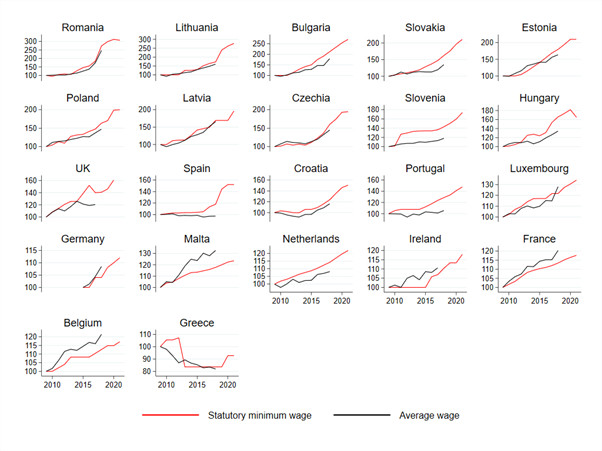 Notes: Data on monthly statutory minimum wages and average wages are presented as indexes (2009 = 100), except for Germany, where the base year is 2015, when the minimum wages were introduced. Countries are ranked by the magnitude of the average yearly growth rate in minimum wages over 2009–2021 (2015–2021 for Germany).

Member States with the lowest rates are catching up

EU Member States have strongly converged in their statutory minimum wage rates (as well their average wage rates) over the last decade. This is the result of two simultaneous developments in minimum wages. On the one hand, growth has been modest among the older Member States that have the highest minimum wages: Belgium, France, Germany, Ireland, Luxembourg and the Netherlands. On the other hand, there has been remarkable progress among countries that have the lowest rates, which have at least doubled those rates over the period: Romania, Bulgaria, the Baltic states, Hungary, Slovakia, Poland, Czechia and, behind them, Slovenia and Croatia. This convergence is evident when data on nominal minimum wage rates is used, but it is even stronger when correcting for differentials in economic conditions and price levels across countries.

Unlike the central and eastern European countries, the Mediterranean Member States have failed to significantly catch up with those countries that have the highest minimum wage rates. Greece is a particularly dramatic case in point: its minimum wage was cut in 2012 and subsequently frozen until 2019. More recent developments in Spain, however, are positive, especially the large increase in 2019.

EU employment, social affairs and health ministers will meet in Luxembourg on 14-15 June 2021. Employment and social affairs ministers will discuss minimum wages, the follow up of the Porto Social Summit and the new challenges for social dialogue and collective bargaining. Click here for more information.

The economic uncertainty created by the COVID-19 pandemic slowed, but did not stop, overall minimum wage growth in the EU in 2021. Minimum wages were raised cautiously in most Member States, with the median country recording an increase of 3%. Only a few Member States froze their minimum wage rates, marking a very different approach to that taken in the aftermath of the 2008 financial crisis.

​On 9 May, the Conference on the Future of Europe will get underway. Floated well before the COVID-19 outbreak, its timing in the wake of the seismic shifts precipitated by the pandemic, and its implementation alongside the European Pillar of Social Rights Action Plan, means that the outcomes could be far-reaching.

Gender pay transparency: Advancing the cause through a truly European proposal

With its proposed directive on gender pay transparency, the European Commission has significantly bolstered the set of tools for delivering its objectives compared to those presented in its 2014 Recommendation. The proposed portfolio of measures addresses many shortcomings of the instruments that national authorities currently employ.