Rising levels of employment in manufacturing in the EU since 2013 have seen the part reversal of a long-term decline in employment in this sector. Data from the European Restructuring Monitor (ERM) database to early September 2017 show that, for the first time since 2005, the number of new manufacturing jobs announced in national media (91,740) outstripped the number of announced job losses (46,478).

The most high-profile individual case of job creation, in terms of numbers of new jobs, comes from the German engineering and electronics company Bosch, which announced in March 2017 its intention to create 20,000 new jobs by the end of 2017. The new posts will be mainly in the company’s IT and software departments, but new jobs will also be created in manufacturing. This move is part of a global recruitment programme by Bosch, with some 3,400 planned new jobs in Germany, 3,100 in India and 2,500 in China.

The motor vehicle manufacturing industry is increasingly moving towards the production of electric vehicles and hybrids and away from diesel engines, creating a raft of new jobs around the EU. In Poland, the manufacturing company LG Chem announced in May 2017 that it would create 3,000 jobs at its new factory in Biskupice Podgórne (in the Tarnobrzeg Special Economic Zone). This plant is set to produce over 100,000 lithium-ion batteries a year for electric cars and due to be operational by the end of 2017. The company is investing PLN 1.2 billion (€286.39 million) in the project, establishing Europe’s first mass production facility for this type of car battery. In the UK, the car manufacturer Jaguar Land Rover (JLR) in June 2017 announced plans to create 5,000 new jobs, recruiting 1,000 electronic and software engineers, while the remaining 4,000 will be in manufacturing. It is thought that the new workers, most of whom will be based in the UK, will be involved in the development of new electric models. It is expected that the new jobs will be created over the period to mid-2018. Other motor manufacturers that have announced employment expansion include Ford Romania, which will recruit 2,860 workers this year at a new production facility in Craiova, producing the EcoSport SUV model in 2017. 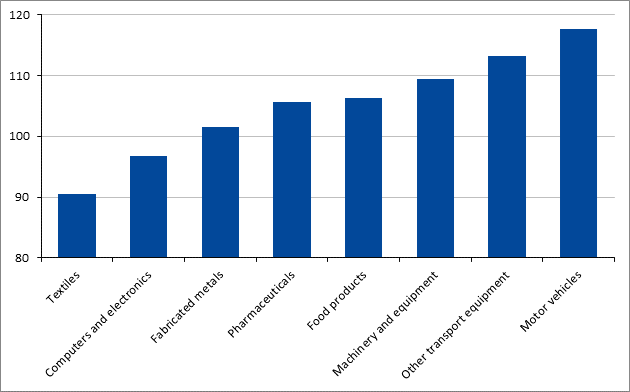 Electric car production has also received a boost from recent commitments by the French and UK governments to ban the sale of new cars based on traditional combustion engine technology by 2040. Individual manufacturers have committed to even earlier transitions to exclusive electric or hybrid car production; Volvo, for instance, has said it will do so by 2019. Other game-changing technology transitions, notably the shift to driverless transport, will also change the nature of employment demand in the sector, primarily to higher occupational profiles in engineering and other STEM (science, technology, engineering and mathematics) roles. At present, the indications from the ERM as well as EU Labour Force Survey data are that fresh investment in new-generation transport is contributing to raising headcounts in the sector.

Data from Eurofound’s European Jobs Monitor 2017 report reflect these developments, showing that employment in manufacturing increased by over 1.5 million between 2013 and 2016, albeit in the context of a greater overall shift towards a more service-based economy. However, the report notes that around 60% of these new jobs were created in the EU13 (the eastern European countries that joined the EU after 2004), even though these countries account for just over a quarter of the EU manufacturing workforce. Furthermore, growth in manufacturing employment in the EU15 (the pre-2004 Member States) has been mainly in high-paid jobs, while that in the EU13 has been more evenly distributed across pay categories. The report suggests that this may be because many of the more traditional blue-collar mid-paying manufacturing jobs have relocated eastwards following the economic recovery, as western European companies take advantage of lower labour costs in eastern Europe.

Disruption on the horizon: Game changing technologies in manufacturing in Europe

The Future of Manufacturing in Europe

​The pilot project on the Future of Manufacturing in Europe was launched in 2015 to explore the prospects for a globally competitive future in manufacturing and the associated implications for employment in terms of the number of jobs, workforce composition, skill needs and geographical dispersion throughout Europe.

The importance of physical tasks in manufacturing is generally declining due to automation; with more intensive use of digitally controlled equipment, and the increasing importance of quality standards, resulting in a growing amount of intellectual tasks for manual industrial workers.