In the context of the ongoing trend of a fall in collective bargaining coverage, and recent calls at EU level to promote collective bargaining coverage as an instrument to support fair and decent wages, new data from Eurofound’s fourth European Company Survey (ECS) show that two-thirds of workers (in private sector establishments with more than 10 employees in the EU) are estimated to have their wages set via a collective wage agreement. Bargaining coverage is substantially higher in countries where there are sectoral agreements and where these are frequently extended to non-covered companies or workers. The most flexible form of bargaining – where company agreements exist in addition to sectoral ones within the same company – is typically found in the Scandinavian countries, but this is also gaining importance in others.

New approach to data on collective bargaining in the EU

The European Company Survey (ECS) gathers information – from both management and employee representatives – on workplace level practices in private sector establishments with more than 10 employees. The newest wave – fielded in 2019 – was carried out online and includes a new approach to obtaining information on the type of collective wage agreements adhered to by companies. Presented with a country-specific list of types of agreements (related to different bargaining levels, occupations, regions, etc.), management representatives were asked to select which agreements (if any) determined the wages of ‘at least some of’ their employees. This approach gives a deeper insight into the co-existence of company level with higher level bargaining. The process of ‘articulated’ forms of bargaining is deemed to be quite flexible compared to ‘non-articulated’ forms of bargaining, as it combines a wider coverage of companies and employees, and allows for the possibility to adapt wages to company-specific productivity developments.

Estimating collective wage bargaining coverage in surveys is tricky, as respondents may not understand the survey question correctly or may lack sufficient knowledge of the issue. While in some cases the estimated numbers in the ECS vary somewhat from other available (national) data, they are based on a harmonised methodology. According to the ECS findings, the lowest levels of wage bargaining coverage is to be found mainly in the Central and Eastern EU Member States (except for Slovenia and Romania). Medium levels of bargaining coverage (around half of the workers covered by wage agreements), are found in Croatia, Cyprus, Germany, Greece, Ireland and the United Kingdom, while medium to high level – 60% to 80% of workers – is recorded in Denmark, Luxembourg, the Netherlands, Portugal and Romania. Countries with the highest collective bargaining coverage (over 80%) – Austria, Belgium, Finland, Italy, France, Spain, Slovenia and Sweden – are those which have strongly developed sectoral bargaining and use legal extension mechanisms or functional equivalents of these more extensively than other Member States. Apart from some smaller ‘surprises’ on the estimated magnitude, which would merit further in-depth investigation [1], the picture obtained via the survey is broadly in line with commonly used statistics. So what is new?

Figure 1: Estimated proportion of employees covered by any form of collective wage agreement in the private sector (%) 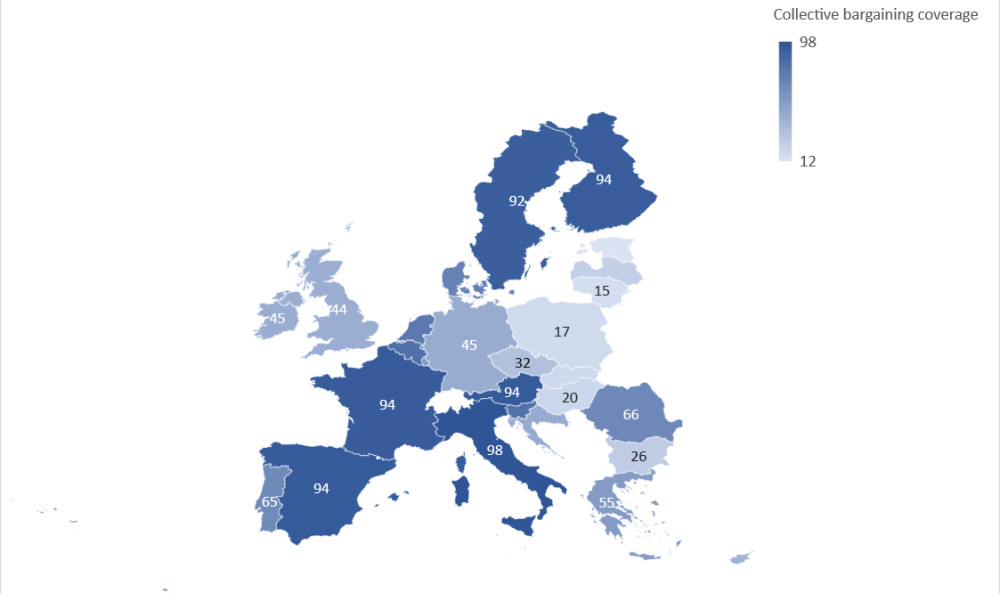 Source: Estimates by Eurofound (2020), based on fourth European Company Survey 2019, replies from more than 21,000 management respondents.

The survey provides a greater insight into bargaining levels and how collective agreements made at different levels might co-exist within the same company.

Four groups of countries were identified on the basis of their pattern of bargaining arrangements:

The extent of sector level bargaining continues to be the most important driver for a large bargaining coverage and is particularly important for small- and medium-sized enterprises, as they tend to be much less often covered by company-level agreements. 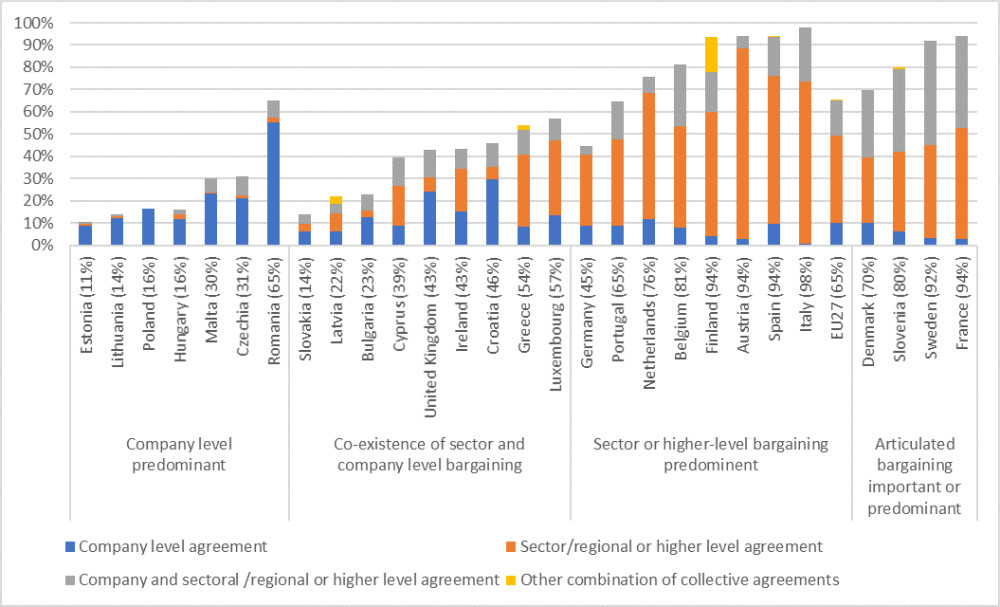 Promoting a high collective wage bargaining coverage has recently attracted policy attention at EU level, particularly in the context of the EU minimum wage initiative. The latest ECS data show that countries whose sectoral bargaining coverage is high also have a much larger overall coverage than those where company-level bargaining dominates. Sectoral bargaining came under accelerated pressure during the economic and financial crisis that started in 2008 – affecting some Member States more than others – when there was a push towards more decentralised approaches or no bargaining at all. In contrast, the current pandemic situation could be used as a springboard to promote sectoral bargaining – in particular, the more articulated forms of bargaining. Why is this important? Sectors and even specific activities or companies feel the economic impact differently: while some have profited from the changing economic climate resulting from the COVID-19 pandemic, others are battling to survive. If the aims are to ensure a high coverage of workers with collectively agreed (minimum) wages, to maintain people’s purchasing power to stimulate the economy and to keep the possibility of a company-specific adaptation to economic realities or productivity developments, then a high coverage of workers with sectoral collectively agreed minima – possibly combined or ‘articulated’ with organised decentralised wage setting to improve the sectorally negotiated minima – will be a necessary means towards achieving those goals.

The #EurofoundCompanySurvey ECS 2019 demonstrates that companies can design their workplace practices to help generate outcomes that benefit both workers and employers. Eurofound is organising a live #AskTheExpert webinar session on 29 October to delve into the European Company Survey 2019 findings relating to skills.

According to the recently published European Company Survey 2019 by EU agencies Eurofound and Cedefop, almost all managers (96%) agree training is important for employees to do their current job and most workplaces in the EU offer at least some training, yet only a small number – 9% – offer comprehensive training and learning opportunities to most of their employees.

​As one of their ‘100 days in office’ initiatives, the new European Commission intends to propose an initiative for an EU minimum wage. The aim is that by 2024 every worker in the EU should earn a fair and adequate wage, no matter where they live. And despite the Commission’s assurance that this would not alter national traditions of wage-setting, emotions are already running high