While the outbreak of the Coronavirus (COVID-19) pandemic presents enormous social, economic and health challenges, it is worth noting on Cyprus’ national day that there have been improvements to the quality of society in recent years with the level of social exclusion declining between 2011 and 2016, while at the same time, the level of trust in people has increased – albeit remaining below the EU average. Furthermore, the European Quality of Life Survey shows that in that period the levels of perceived tensions in society have decreased – falling to below the EU average in 2016. The positive societal developments have taken place alongside economic improvements; with the unemployment rate declining after a sharp rise during the economic crisis of 2008 and the labour market participation rate climbing to 75% in 2018 – above the EU average of 73.7%. However, it is noteworthy that the rate of involuntary part-time work has been on an upward trajectory in recent years, standing 40 percentage points above the EU average in 2018. Those engaged in involuntary part-time arrangements may be particularly exposed to financial hardships in light on the COVID-19 crisis.

As many workplaces adapt their practices to control the spread of the virus, telework is one measure that has been widely adopted in many countries. Eurofound’s research on Telework and ICT based mobile work shows that Cyprus had previously recorded a moderate level of teleworking at 16%, compared to the highest level across the EU at 38% in Denmark and the lowest level at 8% in Italy. Furthermore, research on Convergence in employment and socio economic factors shows that the proportion of the population who need at least basic ICT skills to do their jobs is 60% in Cyprus, compared to more than 80% in Denmark, Ireland and Sweden. These factors may indicate that measures such as teleworking, could prove difficult for a larger proportion of workers in Cyprus, and for some, disruption to regular work is inevitable.

As many will be unable to continue their regular employment, it is expected that the COVID-19 crisis will present a myriad of financial challenges across the EU. This comes at a time when many vulnerable groups in Europe were already exposed to debt and arrears, as highlighted in Eurofound’s research on household indebtedness. In the case of Cyprus, the research shows that the share of population in arrears stands at 29% ­­– the fifth highest level in the EU. The research found that this trend disproportionally affects people aged 25-34, which may relate to existing high levels of youth unemployment, particularly in Southern Member States including Cyprus.

While the COVID-19 crisis will have a monumental impact on all Member States, it is positive to see that Cyprus has experienced improvements to quality of society including an increase in the level of trust in people, a significant decline in share of population at risk of social exclusion and decreasing levels of societal tensions. However, with nearly a third of the population already in arrears, a higher-than-average level of people who had been working part-time involuntarily and a large proportion of workers who may be unable to shift to telework, the coming period will present many challenges.

Eurofound has been monitoring and reporting on living and working conditions in Cyprus, in comparison to other EU Member States, since before accession to the EU in 2004. 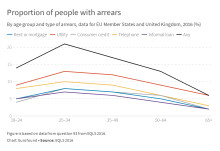 People aged 25-34 most likely to be in arrears

​People aged 25-34 are most likely to be in arrears in the EU, according to Eurofound’s new report on Addressing household over-indebtedness. Among this age group, 21% of people surveyed in the 2016 European Quality of Life Survey reported being in some form of arrears.