This graph, taken from the latest European Restructuring Monitor (ERM) report, shows the announced job losses and gains since 2008. Excluding transnational cases, between 2008 and 2017, some 15,729 cases of large-scale restructuring in the EU Member States were recorded in the ERM. Over 60% of all cases reported in this period involved announced job losses, totalling 4.14 million jobs.

The latest ERM report not only contains important information on announced job loss and gain through restructuring over the past decade, but also but also focuses on the impacts for those that remain in an organisation following restructuring.

The print copy of this report is now available to order free of charge. Place your order or download the report here. 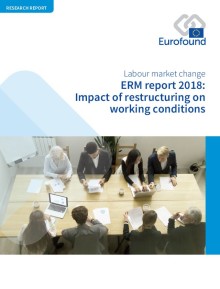 Europe is back on track towards upward convergence, but some outliers remain.