On 26 May 1975 the Council passed Regulation (EEC) No 1365/75 on the creation of a new Agency that would aim to contribute to the planning and establishment of better living and working conditions, through the dissemination of knowledge pivotal to working life in Europe. Now, almost 44 years later, the Founding Regulation of Eurofound gets a 21st Century update that reflects the organisation’s expertise, and continued modernisation and adaptation to a rapidly changing Europe.

The new Founding Regulation puts emphasis on the role of Eurofound in shaping and implementing policies and promoting dialogue between management and labour. It envisages that Eurofound will play a pivotal role in enhancing and disseminating knowledge, provide evidence and services for policy making, and facilitate knowledge-sharing among and between the EU and national actors.

The new Regulation seeks to adapt the Agency’s mandate to reflect the complex and rapidly changing working environment of modern Europe. It gives greater definition to Eurofound’s role; extends Eurofound’s services to the EU institutions, social partners and national stakeholders; and enshrines cooperation between different actors within the Agency’s tripartite institutions. It also updates the Agency’s governance procedure in a way that maximises transparency and accountability; this includes a new direct role for the European Parliament.

Speaking about the coming into force of the new Founding Regulation, Eurofound Executive Director Juan Menéndez-Valdés said, “The adoption of Eurofound’s new Founding Regulation is very significant: it enshrines a spirit of cooperation and mutual understanding that is fundamental for modern Europe. The Regulation also recognises the pivotal work of the Agency, its utility for the EU, national governments, and social partners, and its continued modernisation and adaptation to ongoing change."

The full text of the new Founding Regulation is available via the Official Journal of the European Union.

Annual report: Consolidated annual activity report of the Authorising Officer for the year 2017

Eurofound sets its sights on Europe's recovery and resilience

Eurofound has focused on Europe's immediate social, economic and labour market priorities and its developing role over the coming four years with the publication of its Programming document 2021-2024.

Eurofound’s Management Board has adopted an ambitious work programme for the organisation for 2020, the last of the current multiannual programme for 2017-2020 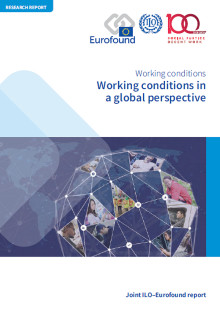 Common challenges face workers across the globe but working women most at risk in every country, continent

Despite differences in economic structure, labour markets and development, a pioneering study of the working conditions and job quality of 1.2 billion workers finds common concerns and challenges across 41 countries and four continents, according to a new report from the International Labour Organization and Eurofound.

With a new European Parliament in place, and a new Commission imminent, it's all change at European level. Eurofound's upcoming research for the rest of 2019 reflects both established priorities under its work programme, as well as ongoing developments in work and life in Europe.

Europe is showing visible signs of progress; in most countries, labour markets are healthier than they have been in a decade, with more people active and in work than ever before, while social exclusion is declining. However, it is also a continent in transition, where an imbalance in opportunities for prosperity and quality of life directly determines to what extent you have felt this recovery.