Company restructuring may hit the headlines less in good times, but it remains a central experience in the working life of many. According to the most recent European Working Conditions Survey (EWCS) data, just under one in three (30%) employees in the EU reported that restructuring had taken place at their workplace in the preceding three years. A similar proportion reported working in downsized workplaces. Large scale restructuring involving job loss is usually well-documented, and there is rightly a focus on what options there are for those who have lost their jobs. But what impact does all this have on those that are left behind? 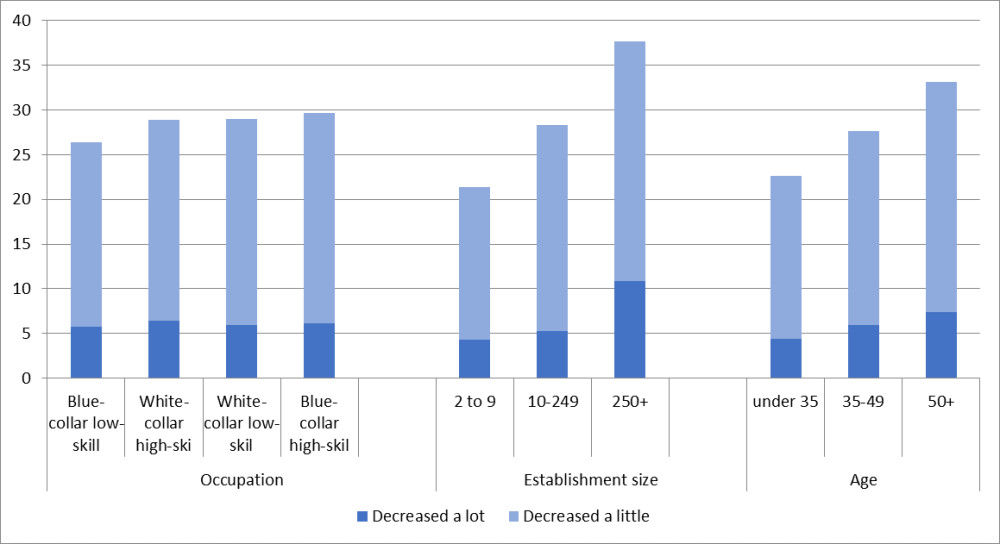 Restructuring can take a heavy toll

It should firstly be noted that restructuring can come in many different shapes: it can translate into a rethinking of workforce strategies, a reconfiguration of work organisation and training practices, and the most feared of all, the shedding of many jobs. Management may see the positive potential of restructuring efforts in terms of cost savings, the opportunity to make the business more viable, agile or profitable; but from the worker’s perspective, restructuring is often just bad news.

Data from the EWCS reported in the latest European Restructuring Monitor (ERM) report confirm that restructuring can take a heavy toll on employees and has a negative impact on their well-being, regardless whether there are job losses or not. The experience of restructuring is associated with higher levels of work intensity and self-reported stress, greater exposure to psychosocial risks, work-related absenteeism and presenteeism, and decreased satisfaction with working conditions.

Ongoing restructuring is one possible contributing factor to the increasing share of work-related ill-health that is mental rather than physical in nature. Nonetheless, while restructuring can be disruptive and stressful, it is also correlated with some positive work outcomes. Restructuring was associated with higher levels of employer-paid training and cognitively richer work – consistent with restructured workplaces requiring adaptation by means of new, and often higher-level, skills in the remaining workforce.

Evidence from company case studies - complementing Eurofound’s empirical research on restructuring – suggests that training should go beyond the mere development of skills required to cope with increased workload or to adjust to new job requirements. Taking the case of a Dutch insurer, the training offered to employees as part of the new company strategy in the aftermath of the restructuring, revolved around the concept of ‘sustainable employability’ within or outside the company in a longer-term perspective. There was resistance initially on the part of the employees who remained attached to the idea of a lifetime job in the company. Eventually, employee’s resistance to change was eased off by intensifying communication with the staff, helping them to see the long-term benefits of training, investing in their future, making them feel in control and shifting their mode of thinking from one based on job security to one on employment security.

Eurofound’s research on restructuring emphasises that employees’ perceptions and views matter, and restructuring efforts can be compromised if employees no longer trust their employer. Survey data shows that exposure to psychosocial risks is reduced where employees indicated a high level of perceived fair treatment in the restructured workplace. This was one of a number of potential buffer factors identified which serve to limit the negative effects of downsizing.

The story of Bulgarian textile producer Mizia-96 is similar to that of many companies who struggle financially and find themselves with no other choice than making involuntary dismissals. Hit by the 2008 economic downturn, the management at Mizia-96 tried hard initially to retain staff despite plummeting sales. When it became apparent that jobs had to be shed, the management, in close cooperation with the union, strived to ensure equitable treatment of the dismissed. This included looking after the most vulnerable workers who retained their jobs alongside the most qualified, on whom the company relied to keep it afloat. The way Mizia-96 handled the dismissals sent a powerful message to the remaining employees, who assumed that they would be treated likewise if ever a new restructuring was to take place.

Of course, there are many different strategies that companies can implement in restructuring, but the evidence shows that the success of any restructuring is at least partly linked to the way the process of change is managed. The extent to which employees are supported throughout the restructuring helps to make sense of the process and cope with change. Firms need to be aware of the damage that restructuring can do when it is not planned thoroughly and carefully. When the needs of the employees are not met, or when no investment is made on the workforce, everyone pays a high price in the long-term, not just the employees.

Common challenges face workers across the globe but working women most at risk in every country, continent

Despite differences in economic structure, labour markets and development, a pioneering study of the working conditions and job quality of 1.2 billion workers finds common concerns and challenges across 41 countries and four continents, according to a new report from the International Labour Organization and Eurofound.

Restructuring: Announced losses, gains and impacts on those who remain

This graph, taken from the latest European Restructuring Monitor (ERM) report, shows the announced job losses and gains since 2008.

Trade unions in many EU Member States face the issue of declining membership. This is a fundamental challenge for organised labour, but it is premature to speak about the redundancy unions: when it comes to important decisions affecting the workplace, restructuring being one, trade unions remain a powerful mechanism of employee voice.