Implementing a living wage could play a significant role in offsetting the rise of in-work poverty across the European Union, according to a new report from Eurofound on the Concept and practice of a living wage in the EU. The report suggests that the introduction of a living wage in EU Member States, currently only in practice in the United Kingdom, could give practical expression to the “fair wage” provisions in the European Pillar of Social Rights.

The living wage is a measure of income calculated to afford an employee a basic but socially acceptable standard of living. The living wage takes into account the costs of important aspects of daily life such as housing, transport, childcare and basic goods and services. It also factors in existing state entitlements for those on low pay. Living wages are invariably higher than the statutory minimum wage, and campaigns around the living wage are often based on the premise that statutory minimum wages result in inadequate income for many workers, and that work should pay enough to allow workers to have a basic but decent standard of living.

To date, the main living wage campaigns have been conducted in a small number of English-speaking countries, all of which are analysed in the report. In the UK, which has the most developed living wage campaign in Europe - and where more than half of those in poverty live in working households - over 4,000 employers have volunteered for living wage accreditation from the Living Wage Foundation. There is also a campaign in Ireland based around a living wage, and in Slovakia, Poland and Latvia there are similar calculations on wages based on the cost of living carried out by state-funded agencies.

The living wage concept has had limited traction in EU Member States beyond the UK and Ireland. However, the European Pillar of Social Rights implicitly acknowledges that widespread existing legal minimum wages need further buttressing either through pay, or through entitlements and the tax system, in order to afford workers a ‘modest but acceptable’ standard of living. Eurofound’s living wage report highlights the important role that public authorities can play on local and national level by paying public employees the living wage, a policy that could also be extended beyond workers directly employed by the state to those working on public premises in outsourced service provision.

Living wage initiatives have highlighted the limitation of statutory minimum wages in meeting pressures from the rising cost of living and that action needs to be taken in certain areas to make work pay. Not all workers become rich by virtue of their work, but it should be commonplace that those who work hard or work full time should at least earn enough not to be poor.

Download the report: Concept and practice of a living wage in the EU 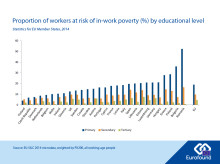 Being poorly educated increases the risk of in-work poverty

This graph highlights the importance of education, indicating that in all EU countries except Finland, the at-risk-of-poverty rate is highest among people with the lowest level of education. 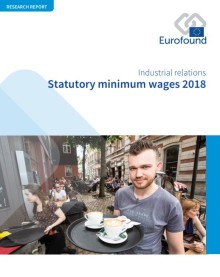 The growth in average (nominal) pay of employees has accelerated in recent years in EU countries after a slump following the economic crisis (AMECO data). Similar developments show up in data on collectively agreed wages. However, higher wage growth figures do not automatically mean that all employees benefit equally

Wages grew and wage inequality fell in most EU countries in 2015. Germany is not one of the countries where wages rose most, but it did have the largest reduction of wage inequality. Our analysis shows that the German minimum wage policy introduced in 2015 strongly lifted the wages of the lowest-paid employees, particularly those employees who were lower-skilled, younger or working in services.