The employment fallout of COVID-19 has been a story of two types of service work. Office-based knowledge workers have largely kept their jobs and incomes while participating in the huge and apparently successful ad hoc social experiment in working from home. Client-facing service workers have borne the brunt of the lockdowns and the steep declines in demand for in-person services in restaurants, hotels, leisure and the arts. The upshot is that, unlike the ‘mancession’ following the global financial crisis, the first impacts of the pandemic have fallen disproportionately on low-paid female workers. But to see this in the statistics, we must start by looking beyond the unemployment rate.

Don’t rely on the unemployment rate

It is now a commonplace that the unemployment rate in the EU has risen only modestly since the onset of the COVID-19 pandemic. The EU27 unemployment rate currently stands at 7.5%, less than a percentage point higher than its pre-crisis low. [1] In some Member States, notably Italy, the unemployment rate declined sharply in the second quarter (Q2) of 2020, even as COVID-19-related mortality peaked. But we should not be reassured by the headline labour market data. The unemployment rate, our customary indicator of labour market health, has been particularly inadequate in characterising the effect of the pandemic on the employment situation of European workers.

A higher share of workers have transitioned into inactivity than unemployment, leaving the labour market – and the unemployment statistics – altogether. Many workers benefiting from temporary lay-off and short-time working schemes due to business closures remain officially employed but have not worked for much of the last year. They also remain at greater risk of unemployment when normal life resumes, as not all employers will be in a position to reopen shuttered businesses. And even for those who have continued working since March 2020, average working hours have decreased in line with an inevitable damping down of economic activity induced by lockdowns.

So what metrics should we use to get a truer picture of what is happening in our labour markets as a result of the pandemic? Eurofound has looked in more detail at three measures in the EU Labour Force Survey quarterly data:

According to the first measure, we see already that the EU27 employment level was around 6 million lower (just over 3%) in Q2 2020 than would have been anticipated based on trend growth. This occurred in the first flush of the pandemic, in just one quarter, but knocked out as many jobs as the global financial crisis did over two years.

The second and third measures capture shifts on the intensive margin – the labour inputs of those who remain employed. The second measure is a proxy for furloughed workers – those whose jobs were ‘put on ice’ as a result of lockdowns and where the state intervened to support income via pandemic unemployment benefit, temporary lay-off or short-time working schemes. And it is here that the most dramatic impacts of the crisis during the first wave of COVID-19 are revealed. The customary share of EU workers not working in any week in Q2 2019 was around 7% – for reasons of annual leave, sickness, etc. This more than doubled to 17% during Q2 2020: one in six workers was not working in that second quarter. Those who were, were working on average one hour less a week.

The sector-specific impacts of these shortfalls were very unevenly spread, as the table below illustrates. 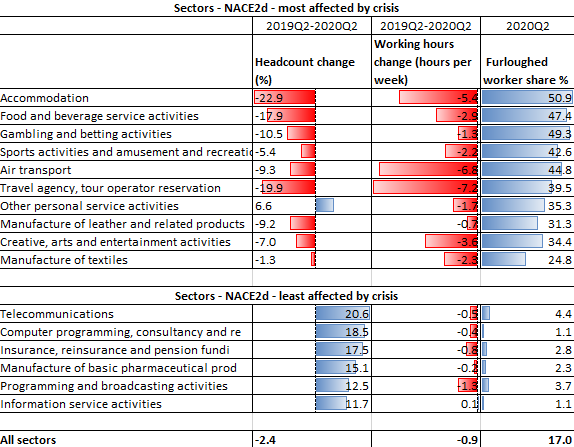 The single sector most affected by declines in labour inputs during the crisis has been accommodation, which includes hotels and other holiday accommodation. Employment contracted in the sector by nearly a quarter in the 12 months to Q2 2020. Just over half of the remaining workers in the sector were on furlough in a given week during the quarter, and those who continued to work worked on average 5.4 hours less than a customary working week. Taken together, these data imply around a two-thirds reduction in paid work hours. More broadly, hospitality, travel, and sports or leisure-related activities – all heavily reliant on physical proximity – were the ones that suffered the biggest contractions in hours worked and employment. And, while the most important factor in this contraction overall was the share of furloughed workers, job loss was clearly an important factor in accommodation, food and beverages, and travel agencies. In these sectors, extensive recourse to furloughing may have saved some vulnerable jobs but not all; around one in five jobs disappeared between Q2 2019 and Q2 2020.

While person-to-person service sectors suffered the most, other more knowledge-intensive service sectors were relatively less affected by the pandemic. There was robust headcount expansion and less recourse to furloughing in telecommunications, computer programming and consultancy, broadcasting, and information service activities. Employment resilience was supported by the ‘teleworkability’ of much work in these sectors.

Looking just at the job loss impacts, an interesting comparison is with the global financial crisis of 2008–2010. In both, well-paid work was comparatively sheltered from the worst effects of recession. Employment continued to grow in the jobs that constitute the best-paid 20% of employment, with over one million net new jobs created in both periods (see the figure below).

Net employment losses were, however, quite distinctive. During the global financial crisis, the sharpest losses were recorded in the middle of the job–wage distribution, with the lowest-paid jobs relatively unaffected. During the COVID-19 pandemic, employment falls have been sharpest in low-paid jobs.

Figure: Employment shifts (in thousands), by gender and job–wage quintile: Comparing the global financial crisis and the first phase of the COVID-19 crisis, EU27

The different sectors impacted in each crisis is a big part of the explanation for the difference. The global financial crisis affected manufacturing and construction first and foremost – male-dominated, mid-paid sectors. As we have seen, the COVID-19 pandemic has primarily affected service sectors that involve a high degree of social contact, many of which employ more women than men and where average pay tends to be low. This is reflected in the right-hand panel, in the sharp contraction of bottom quintile employment for women.

In summary, while the global financial crisis triggered a ‘mancession’, with two male jobs lost for every female job lost, the COVID-19 crisis has been more balanced in its employment loss in terms of gender, but this loss has been felt most sharply by women working in low-paid service sectors.

Higher-paid service workers have fared much better across all labour market outcomes. The shelter of telework has been an important dimension of this resilience, but access to this shelter is very much task dependent. Computer-facing, knowledge-based work can shift into the home, but much in-person service work is still difficult to perform at a distance or virtually. One divide made stark during the crisis but likely to persist beyond it is that between ‘remotes’, whose work lends itself to telework, and the remainder, including many ‘essentials’, for whom telework is largely not an option. [2]

The employment toll of COVID-19 has been stark in Europe, and it could have been even greater had it not been for the adoption of unprecedented assistance measures in all Member States, supported by the European Union. But have these policies benefited different groups in the labour market equally, or have they cemented existing inequalities in access to support?