The COVID-19 pandemic has impacted on economies and labour markets worldwide: suddenly, severely and almost simultaneously; however, some sectors and workers have been much more affected than others. Lower paid workers in the EU27 and UK have been hit hardest by the crisis, losing more working hours than higher paid managers and professionals.

Decision-makers on minimum wages were faced with determining the 2021 level of minimum wages in the context of challenging economic conditions, downward pressure on wages due to higher unemployment, and great uncertainty about the economic projections for the months ahead. In addition, the pandemic led to disruptions in normal negotiation and consultation processes.

Table: Increase in nominal statutory minimum wages between 2020 and 2021 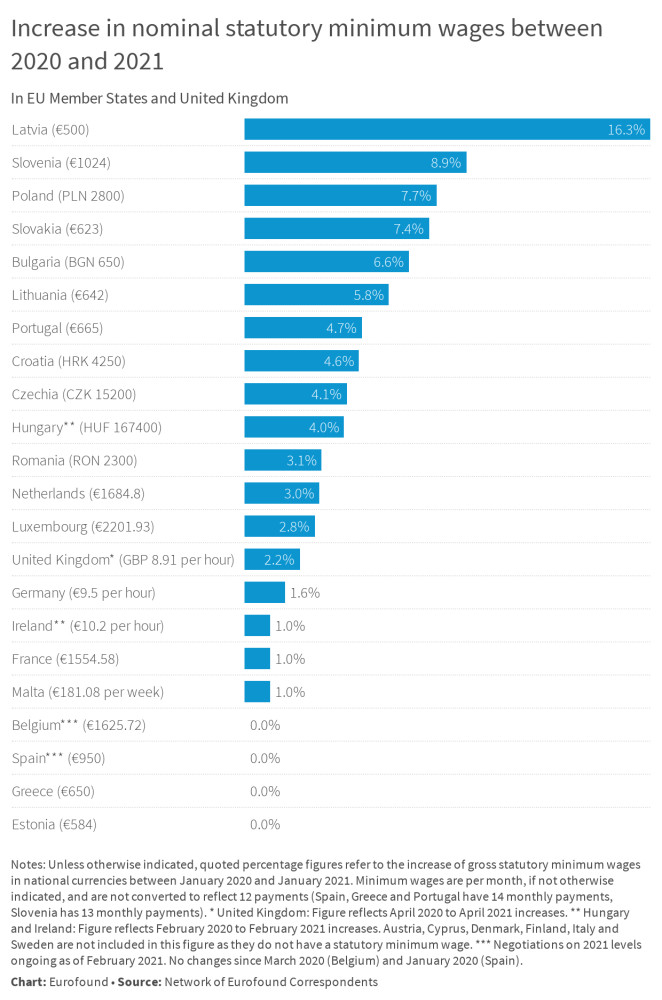 Where minimum wage setting is based on formulas (France, Germany, Luxembourg, Malta and the Netherlands), the process tended to be systematic and not too controversial. In such cases, there was no substantial crisis-related deviation from the standard formula. In some central and eastern European countries, where minimum wage rates are often very low – for example, Bulgaria, Latvia, Poland, Slovakia, Slovenia, and to a lesser extent Lithuania and Croatia – the nominal minimum wages of 2021 were increased considerably, as several governments tried to adhere to their previously announced intentions to increase minimum wages relative to other wages – or relative to a minimum cost of living level. Some, however, fell short of their initial intentions. While others sanctioned an increase to maintain purchasing power, a more convincing rationale was the ‘fairness’ argument and the pressure to improve the remuneration of low-paid essential workers. The EU minimum wage initiative, which emphasises the need for adequate minimum wages to prevent in-work poverty, may have acted as a catalyst in some cases.

To date, only two countries – Estonia and Greece – have decided to keep the minimum wage frozen for a full year, and two more countries – Belgium and Spain – are continuing the negotiations into February. This is in contrast to the last financial and economic crisis when many Member States froze their wages relatively quickly and for a longer time as noted in Eurofound’s report on pay developments in 2010. It remains to be seen whether this trend will continue or whether minimum wages will come under more pressure in 2021 if the economic situation worsens.

Eurofound will be monitoring the emerging situation over the coming months and will provide updates and further analysis in forthcoming publications, including in its upcoming report Minimum wages in 2021: Annual review.

At the end of his term as Executive Director on 30 November 2020, we engaged in a socially distant interview with Juan Menéndez-Valdés to review the last decade, his thoughts on Europe and his hopes for Eurofound.

Eurofound has published updated monthly comparable data, converted to euro and standardised across 12 months, for 21 EU Member States and the United Kingdom for 2021

COVID-19, Big Brother and the business case for doing better

In the most successful businesses, managers were found to facilitate employees to work independently rather than to focus on controlling whether they carried out their tasks. Closely monitoring employee behaviour might indeed ensure that workers do their job but is unlikely to motivate them to go beyond their job description.

The employment toll of COVID-19 has been stark in Europe, and it could have been even greater had it not been for the adoption of unprecedented assistance measures in all Member States, supported by the European Union. But have these policies benefited different groups in the labour market equally, or have they cemented existing inequalities in access to support?