To date, close to six million workers in the EU have lost their jobs due to COVID-19. Many businesses have closed their doors forever or been pushed to the brink, bringing severe financial and psychological hardship to the individuals and families affected. However, the toll of the pandemic could have been even greater had it not been for the adoption of unprecedented assistance measures in all Member States, supported by the European Union, including through the SURE (Support to mitigate Unemployment Risks in an Emergency) initiative in 18 countries. But have these policies benefited different groups in the labour market equally, or have they cemented existing inequalities in access to support, effectively creating two worlds of income support during the pandemic?

Short-time working as a new panacea

In response to the COVID-19 crisis, nine Member States introduced new short-time working or similar employment and income protection schemes to assist companies and their employees. Most of the other 18 Member States, which already had such measures in place, adapted them to the changed requirements. This means that all EU countries have had such provisions in place during the pandemic, demonstrating that lessons on the positive effect of short-time working have been learnt from the economic and financial crisis.

However, schemes differ significantly in relation to eligibility, level of support and duration of access. For example: 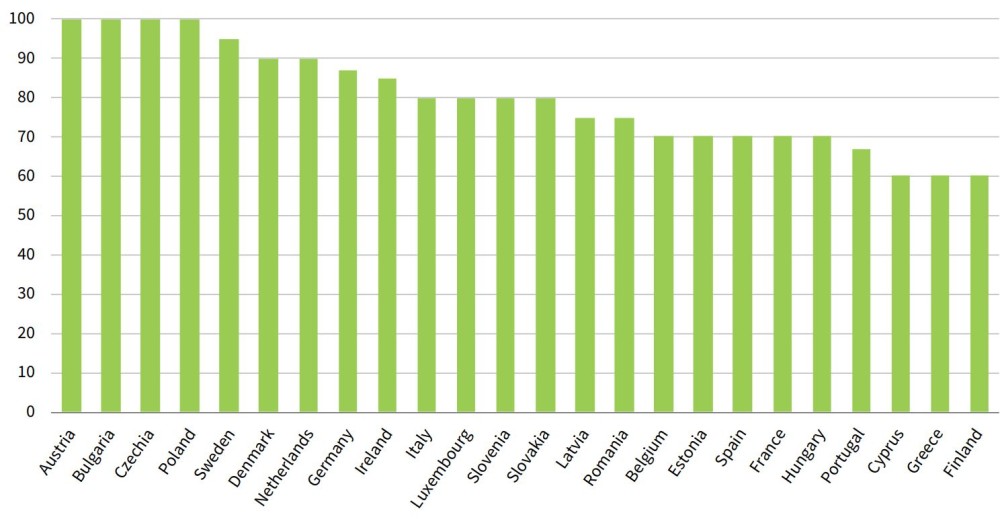 Source: Authors, based on information provided by the Network of Eurofound Correspondents

Estimates available from a limited number of countries show that short-time working schemes reduced the drop in household incomes during the most severe lockdown in the first wave from -22% to -7%. This confirms the findings of the Eurofound Living, working and COVID-19 survey, which shows that individuals benefiting from such schemes are less likely to experience financial hardship.

Differences also arise in relation to dismissal protection for workers beyond the period of eligibility for short-time working allowances. This ranges from 1 month to over 12 months. Austria, Greece, Italy, the Netherlands (in the first phase of support) and Portugal extended dismissal protection beyond the worker benefiting from the allowance to the employer’s whole workforce. The presence of such protections is likely to become increasingly relevant as supports are phased out and the duration of lockdown measures puts more and more businesses in peril.

The need to act swiftly to protect livelihoods in a situation where public health restrictions led to business closure or severe economic impact for many self-employed prompted governments in at least three-quarters of EU countries to implement income support measures for this group. While previously unthinkable in their scale and content, the level of income support offered to self-employed workers nonetheless largely fell short of the financial assistance provided to employees.

As is the case with short-time working and temporary unemployment schemes for employees, eligibility criteria led to the limitation of support to certain groups of self-employed. Among the most important of these criteria was a requirement to demonstrate a certain level of income loss. This left many outside the ‘umbrella’ of such protections.

The example of 11 Member States in the table below shows that in 9 of these countries the eligibility requirements to receive support are more stringent in relation to income support for the self-employed than for employees, leading a higher share of self-employed not being able to access support.

Table: Comparison of eligibility criteria for access to income support schemes for employees and self-employed linked to minimum requirements regarding reduction in income or turnover (data up to September 2020)

Note: The percentages in the table represent the reduction in income or turnover that must be demonstrated in order to get access to the support schemes. In the case of some short-time work schemes, the requirement relates to the impact on a specific share of the workforce.

It is important to note that these measures relate to the ‘entrepreneur’s wage’, which can in many countries be claimed in addition to any public assistance linked to business-related fixed costs. Nonetheless, this demonstrates that despite the introduction of income supports for the self-employed who previously had no or limited access to such assistance, it remains a case of ‘two worlds of income support’ in most countries when comparing the protections available to employees and the self-employed.

If we add to these the differences in eligibility and supports available to short-time working schemes for employees, what has in fact emerged is a ‘multiverse’ of difference in access to crucial income and employment protection, which has left those already vulnerable prior to the pandemic at greater risk of hardship.

Disclaimer: Please note that this blog was updated with revised data (specifically for Bulgaria) on 24 March 2021.

Short-time work or similar measures were implemented in all EU Member States during 2020 and contributed greatly to limiting the rise in unemployment that resulted from the COVID-19 pandemic. However, further success was hampered by varying levels of income protection between countries, as well as limitations in coverage.