The report highlights that single-person households are at greater risk of poverty and social exclusion, which is partly due to having only one income with which to run a household. Lithuania and Bulgaria, which have both experienced the largest increases in the share of the population living alone over the last decade, also report the highest levels of income inequality in the EU. Among those of retirement age, women are nearly twice as likely to live alone (42%), compared to men (24%), and are therefore more at risk of experiencing poverty. The fact that pensions are, on average, 30% lower for women than men in the EU further compounds this issue.

Speaking about the findings of the report, Eszter Sandor, Eurofound Social Policies Research Manager, said “This research suggests that the increase in single occupancy households, coupled with a sizeable gender gap in pension cover, is contributing to high levels of income inequality – this needs to be taken on board for future policy action in this area.” 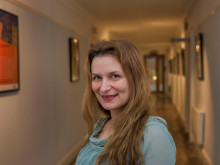 Dublin and London have higher proportion of people struggling to cope

Dublin and London have a higher proportion of people that report low resilience, which is an expressed difficulty to cope with important life problems, than both the national averages and the EU average. This goes against the general trend that people living in capital cities have a higher level of resilience than other urban or rural areas.

People in Europe’s capitals more satisfied with their lives

People living in the capital cities in Europe generally have a better quality of life and report higher life satisfaction than those living in other parts of the country. Capital cities also have a larger proportion of people who report feeling being able to cope during times of hardship than other urban centres and rural regions. 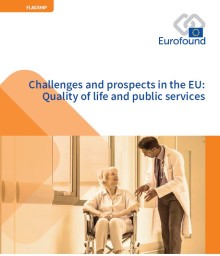 Levels of trust and social cohesion have recovered overall in the EU since the financial crisis, perceived social exclusion has declined and there has been an increase in active citizenship and civic engagement, according to Eurofound’s flagship report ‘​Challenges and prospects in the EU: Quality of life and public services’.

Quality of life improving in Lithuania although signs of inequality remain, particularly for older people, women

Lithuania has experienced significant improvements to the perceived quality of public services and overall living standards in recent years. However, despite overall increases to quality of living standards, income inequality has been increasing since the financial crisis, making Lithuania’s income distribution the second most unequal in the EU.

Estonia reports substantial increases to life satisfaction and happiness levels over the last fifteen years and optimism for the future is high with 69% feeling optimistic for their children’s or grandchildren’s future - above the EU average of 57%. Coupled with this, the perceived quality of public services has improved with childcare and public transport seeing the greatest increases.

France, Sweden and Finland have highest cohabitation rates in EU

Cohabitation – couples living together without being married – is on the rise in Europe. Eurofound’s calculations of EU data shows that France (13%), Sweden (13%) and Finland (12%) recorded the highest co-habitation rates in the EU in 2017.

​Hungary has recorded a remarkable improvement in the level of labour market participation over the last decade and unemployment rates have fallen to some of the lowest levels in the EU. At the same time, life satisfaction in Hungary has increased from 5.9 in 2003 to 6.5 in 2016 and the share of population struggling to make ends meet has been on a downward trajectory. 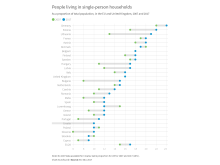